This is Better than Mach 25

“This is better than flying at Mach 25!”

That was the response I heard from former NASA astronaut Story Musgrave as he walked out to take a flight in an AirCam with Phil Lockwood last Saturday afternoon. I started the exchange by saying to him; “don’t go into orbit”.

It was a special day for many reasons. There was an AirCam fly-in hosted by Lockwood Aviation. AirCam owners/builders attended from all over the country. The AirCams came home to their birthplace at Lockwood Aviation. The other key event was Story Musgrave, who came to meet with the EAA Chapter 1240 youth members who are going to build an AirCam with and for him.

In the past few years there has been many youth aircraft building projects happening around the United States. It has gained popularity as high schools, charter, and private school have seen the potential for their students to learn first-hand the concepts of STEM (Science, Technology, Engineering and Math). These programs usually have involved building an RV-12, single engine, two seat light sport aircraft. The RV-12 is a kit from Van’s Aircraft and is a very well designed. It is a complete kit and has proven to be a very successful project. 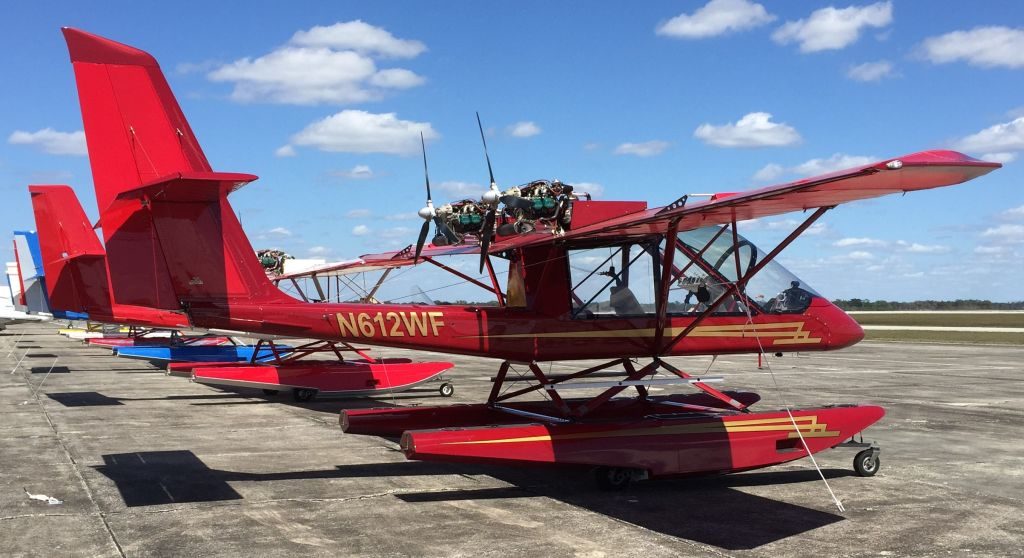 Locally we have a history of involving high school youth and aircraft. In 1999 at Lake Placid High School, we helped a local pilot build an experimental Challenger aircraft in my shop with the newly formed Aviation/Aerospace class. It was a two place, 100 HP aircraft with a 32-foot wingspan. It was a great project and it took up most of the front end of the shop. We discovered a couple of important things. First it was very hard to keep all 24 students in the class working on the aircraft at once, and second, it made it difficult to teach woodworking in the same shop. After the build, we transitioned to building and flying radio controlled aircraft. That proved to be a very successful program and the Aviation/Aerospace class carried on for many years. We were one of the first programs to do this type of class in a high school.

As time passed, more high school aviation programs developed. It fulfilled a need to develop technical skills that would transition to a highly skilled work force, supported the STEM curriculum, and draw students that were highly motivated and willing to work hard.

Our local EAA Chapter 1240, the Sebring Airport, Highlands County School Board, and Career Source Heartland (formerly Heartland Workforce Board) came together to promote youth aviation programs. We have enjoyed great success and community support for which are very grateful. I personally still had a desire that needed attention. Although EAA Chapter 1240 had several project aircraft donated which involved the area youth, we still did not have that kit plane we would build from the ground up.

That dream came true because of our meeting Story Musgrave and his desire to have an AirCam. Our project takes the concept of a youth aircraft build to a whole different level. The AirCam is not a light sport aircraft, but a larger twin engine experimental aircraft that is a unique design. This is the first time an AirCam is being built as a youth project and we are excited be on the leading edge again.

It is no secret that the pilot population and other professionals in aviation are “aging out”. We need to recruit and help youth discover the opportunities in aviation and aerospace. It is not just the pilots; it includes the professionals that take care of the maintenance, engineers that design the aircraft of the future and the related systems, and hundreds of other occupations involving aviation and aerospace. The opportunities are there and they are real.

Just think what impact it would have had on your resume’ when you were applying for a job or admission to college and you could indicate you built and an aircraft with a former NASA astronaut! That will be just one of the many benefits our youth will earn from the AirCam youth project. This is hands-on learning at the very finest level.

Our school board will be participating in the effort, and I was asked if we should consider doing some of the work during the regular school day. My response may surprise some, but I said absolutely not! We will be working on weekends and possibly some after school hours, or when school is not in session. We want youth that are committed to the project and would not be tempted to skip out and go to the beach, hang out with friends, or any other distraction. If the students are willing to give up their own time, they will be committed to get the project completed. In my experience when I taught the aerospace high school elective, I had students that enjoyed the class but would not commit to the projects and flight opportunities outside the school day. They did not take advantage of all that was offered. There is room for more youth to join the AirCam build, but we want to be forthcoming as to what is expected.

So, as the project moves along, we will document the effort on the EAA Chapter 1240 web site. More to come…