As I sat next to NASA Astronaut Story Musgrave at our EAA Chapter 1240 dinner last week, we chatted about many things and what we were doing with our youth aviation programs. It was a table full of lively conversation as other featured Expo presenters were there including Melissa Mathiasen who flies Sikorsky Helicopters and aerobatic champion Patty Wagstaff. It was easy to get carried away in conversation with Story, and I had to be reminded that it was time to introduce him as our after-dinner speaker.

Conversation with one of the more famous NASA astronauts who repaired the Hubble space telescope and to learn about his journey through life and all he has accomplished, can leave your mind spinning. I was juggling being the master of ceremonies and absorbing the content of our conversation. In situations like this, you sometimes don’t have time to realize the impact and significance until afterwards.

Story had told me during dinner that he was interested in an AirCam, the twin-engine aircraft designed 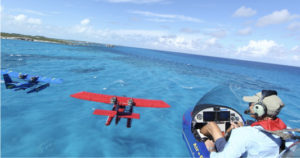 by Phil Lockwood and manufactured by Lockwood Aviation at the Sebring Regional Airport. He said maybe he could find someone who would build one for him. In the flow of the evening, I filed that thought away.

Sunday morning I received an e-mail from Story expressing how much he enjoyed being the featured speaker at our dinner. He was impressed with the youth he met and what they were doing to explore and expand their opportunities in aviation and aerospace.

I remembered his interest in an AirCam. He even acknowledged the interest during his presentation. I recalled his thought that it would be nice to have someone build it for him. Then it hit me; why not have EAA 1240 youth members build AirCam for him? We have experienced AirCam builders in the chapter, a group of youth already involved in projects such as the Aeronca Champ, and the AirCam factory is next door. It seemed to make sense.

I responded to Story’s e-mail by saying how much we appreciated and loved his presentation, and extended an open invitation to be a part of what we are doing. Since he had mentioned the desire to have an AirCam built, I suggested that we could take on the AirCam build as a chapter youth project. I asked him to think about it and let me know when he had time. His response took all of five minutes! He loves the idea. As a youth project, we are now going to build an AirCam with an ex-NASA astronaut and one of the world’s most accomplished people. What a way to have the STEM curriculum (Science, Technology, Engineering, and Math) become real and “hands-on”.

During the US Sport Aviation Expo, a new initiative “YAZ” (Young Aviators Zone) was introduced to over 600 STEM students from Desoto, Hardee, Okeechobee, and Highlands counties. The students came to hear speakers and be exposed to Expo activities and exhibits. Now those students who would like to be a part of the AirCam build, will have the opportunity of a lifetime to be involved with something very special.

Chapter 1240 recently has had many positive developments. The Champ youth project is well on the way to being completed. Travis Peeples who began his aviation exploration with a Young Eagle flight when he was in my aerospace class at Lake Placid High School will be taking his FAA check ride next week to acquire his pilot’s license. Nix Thomas a senior at Sebring High School is getting ready for his FAA check ride very shortly, and after Nix is done, Kayla Comeau a junior at Avon Park High School will be the next recipient of the EAA Chapter 1240 flight training scholarship to earn her pilot’s license. The installation of the FAA certified flight simulator in the classroom and the donation of a Cessna 172 to the chapter have added even more resources to assist with our youth aviation education efforts.
In the next few weeks we will be developing the details of the AirCam youth project build.

Youth and their families who are interested in participating can e-mail me at jhr@stratomail.net. We will also have more information at our monthly pancake breakfast next Saturday, February 11th. If you want to see what an AirCam is and what it does, go to this link: http://www.aircam.com/media-and-news/galleries/videos Come and join us, the fun is just beginning!