Another Aircraft Comes to EAA 1240

As my cell phone rang and I looked at the caller ID, I saw it was Roger Smith of Carter Aircraft. I have known Roger for a long time and he is the FAA certified Airframe and Power-plant mechanic that maintains our Flying Club aircraft. Recently we have had some maintenance for the aircraft like a flat tire or other minor issue, and I was thinking: “what now?” 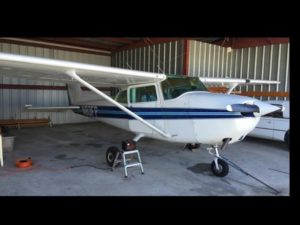 He indicated that he has a client that was interested in donating a Cessna 172N aircraft to our EAA Chapter 1240. He asked “Was I interested?” Our EAA Chapter 1240 has had four different aircraft donated over the years. All four up to this point were “projects” to be rebuilt or used for parts. None were in flight worthy condition.

I was expecting the same kind of situation, but I was wrong. The owner had passed away a few months ago and prior to that he indicated to Rodger that someday he would stop flying and he thought about selling the airplane or maybe donating it. The owner asked about what was going on next door in the EAA building. Roger then took the time to explain all we were doing with youth aviation education and flight training. The seed was planted.

The family knew of the owner’s desires and we soon had the aircraft donated to our EAA chapter. The aircraft is air-worthy and has been maintained for many years by Roger at Carter Aircraft. All the required upgrades have been done, as it was a cherished family member that received very tender loving care. This is not a project aircraft, but will be soon supporting our EAA Chapter 1240 Young Eagle flight program, leading to flight instruction through the Heartland Flying Club.

As I write this, I’m still numb from how it all came together. The aircraft could have easily sold in excess of $45,000, and now we have another aircraft to continue our mission for supporting youth aviation education. We have been blessed with so much support in establishing the EAA Chapter 1240 Aviation Development Center (aka EAA 1240 hangar): the flight scholarship support, the new flight simulator, the volunteers that show up to conduct our programs, and the community that comes out the second Saturday of the month for one of the best pancake breakfasts around, sharing good times and fellowship.

The family of the aircraft owner wanted to find out more about our EAA chapter so I spent the morning touring our building and explaining what we are doing. They also happened to see one of our past Young Eagle participants flying the simulator with a flight instructor giving him instruction. I indicated there are many programs and organizations that will ask for support for worthy causes. We fall into those ranks, but here you can see we get things done and have a track record to prove it.

Sometimes I find myself so busy with the many things that should happen to keep things moving along that I don’t take time to appreciate all that comes our way as an EAA chapter. People like past chapter President Ron Owen who had the foresight to have the chapter become a non-profit 501 C (3) corporation, providing the ability to accept tax deductible donations; Phil Lockwood, whose contacts led to the resources for the chapter building; Greg Griffin who was our building general contractor and guided the construction to completion; Roger Smith who helped spread the word of what we do; and all the volunteers and pilots that make it all work. We are truly blessed.

If you are a person who wants to have some fun and get involved, the door is always open. With the addition of the second aircraft, we have additional openings in the flying club, and there is always room for new EAA Chapter 1240 members individually or as a family. You don’t have to be a pilot, just have an interest in aviation and like to be around fun and nice people. Don’t forget the pancake breakfast tomorrow at 8 AM. Come join us, “We’ll leave the light on for you!”